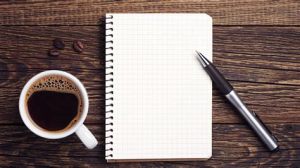 I enjoy writing. I enjoy turning internal thoughts, ideas, fears, feelings, and emotions into external words for others to read. I enjoy the process of organizing thoughts, arranging sentences, revising, revising again, and presenting the thoughts I have wrestled with. I enjoy the sound that a pen makes as it pushes its way across the vast emptiness of paper. There are days when writing is very easy for me- almost second-nature. There are days and seasons when this is agonizingly difficult. It almost hurts to have something to say and not be able to put it into words. I do not make a living through writing primarily. It is however a big part of who I am as a person and a pastor. You may ask, “If it’s not your primary task, why?” You may ask, “With all the other duties and responsibilities you have, why take the time and write?” “If it so agonizing at times, why bother?” All good questions. Allow me to answer.

I write because blank pages hold great promise and immense potential. The Declaration of Independence began as a blank page that would later be filled with words decrying the British throne and words confidently for the establishment of a new nation anchored in certain personal freedoms. Lincoln’s Emancipation Proclamation began as a blank page that would later cry out against the human tragedy of slavery and state the truth all men all created equal. Iconic poems, short stories, and sermons by Frost, Angelou, Wells, Poe, and King all had their beginnings as blank pages. Works by authors such as Melville, Dickens, Aquinas, Twain, Augustine, Faulkner, Woolf, Austen, Lewis, Rawlings, Hawthorne, Homer, Steinbeck, Hemingway, Orwell, Stowe, Mitchell, and Salinger all began as lifeless blank pages- until the author made them come alive and speak.

Throughout human history, great leaders and thinkers have used the power of words to prick our emotions, enlist us in their causes, voice frustration, challenge our convictions, and shape the course of destiny. These words, when digested, created actions. Many famous works moved readers to think differently, act violently, and dream confidently. Hitler’s Mein Kampf details the political ideology of one of the world’s most notorious dictators. His work would later become the basis of Nazi Germany and impassioned millions of German youth to his cause.  Darwin’s Origin of the Species put forth a theory of natural selection that profoundly challenged orthodox thought and belief; introducing the theory of evolution. Orwell’s dystopian novel, 1984 sounded the alarm to the dangers of totalitarianism, surveillance, and censorship. Today, Orwellian phrases like “Big Brother” and “doublespeak” are part of our vernacular.  Augustine’s City of God challenged society to choose which city it wishes to be a part of; marking out the parameters of each choice. He concluded that the purpose of history is to show the unfolding of God’s plan. A notion hotly debated to this day. Paine’s Common Sense presented an argument for independence from England and the creation of a democratic republic among the 13 colonies. Because of its treasonous content toward Britain, it was written anonymously and later framed the discussion for a formal declaration of independence.

I write because words wield great power. Words have the capacity to educate, to inform, to bless, to express love, to articulate hate, to cry out against injustice, to declare war, to call for reform, and can transport us to different times and places. It has been the consistent combination of pen and paper that has for centuries called for revolutions, brought the news to our mailboxes, challenged Americans to serve their country, institute treaties, and dissolved nations. I believe in the power of the pen. Therefore, I write.

I am the Senior Pastor of First Baptist Church in Perry, Florida. I have been married for 28 years to Terri, and I have a 23-year-old son, Jordan, who is married to Skyllar, and they have two children: Kalliahpe and Olliver. View all posts by Steven Ruff