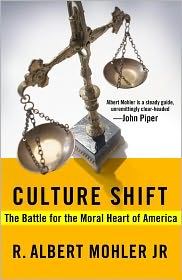 In every generation of evangelical Christianity, there is one who stands in the gap between the marketplace and the church house in order to communicate how biblical Christianity impacts and influences every part of our lives. I believe that Dr. Al Mohler is that man for this generation. Dr. Mohler is the president of Southern Baptist Theological Seminary in Louisville, KY. He has become the voice of conservative Christianity. He continues to be a consistent voice through television, radio, and print. In his new book and first solo effort, “Culture Shift; The Battle for the Moral Heart of America” demonstrates how America is losing its biblical center.

Dr. Mohler begins by stating the positions that most Christians take toward culture: extreme involvement or non-involvement. He sets up his work by using Augustine’s “City of God” as a model and guide. Augustine said that humanity is confronted by to cities: The city of God, eternal and seeking to honor God; The City of Man, passing and self-serving, characterized by disobedience, moral autonomy, and a spirit of rebellion. By way of introduction and a desire to provide necessary groundwork, Dr. Mohler introduces the reader to the voices for and positions of those who would seek a purely secular society void of any reference to God. With intellectual sharpness and respect, Dr. Mohler denounces these concepts and shows the futility of the arguments.

The bulk of his book is spent introducing the reader to the areas of culture in which our lives and society are experiencing shifts. Dr. Mohler discusses numerous topics including the perceived right to never be offended, the role of the Supreme Court and religion, terrorism, biomedicine, public school, parenting, abortion, natural disasters, New Atheism, and the “digital deluge” of modern technology. Mohler, in a very fair but firm manner, deals with each issue and the proponents of these issues in a way that honors God and elevates the Scriptures. These chapters are not an in-depth analysis, nor are they exhaustive. Instead, they serve as a primer for further study and discussion.

I found “Culture Shift” to be engaging, useful, enlightening, challenging, and a stern warning. As a Christian, the ideas and agendas that serve to diminish my worldview are exposed. As a pastor, I was able to see deeper into the competing worldviews that my congregation deals with every day. If there is one negative to say, it would be this. Not enough. The essay blog-post form of the chapters left me wanting much more. I believe the material and topics covered in “Culture Shift” could make up two books giving more attention to each. To say that Dr. Mohler has exposed the slippery slope of liberalism and the cravings of humanist thought would be a gross understatement. I highly recommend this book all who claim the name of Christ who desire to know the forces and agenda coming against your belief system. Well written, researched, and presented. Just what I expected.

Disclosure of Material Connection: I received this book free from Waterbrook Multnomah Publishers as part of their Blogger Review Program. I was not required to write a positive review. The opinions I have expressed are my own. I am disclosing this in accordance with the Federal Trade Commission’s 16 CFR, Part 255: “Guides Concerning the Use of Endorsements and Testimonials in Advertising.”